Skip to Content Jump to Main Navigation Skip to Search

You Are Here: Research Interests 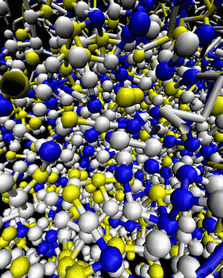 The class of tellurium based alloys, GexSbyTe1-x-y, has been intensively investigated recently due to their paramount technological importance, which stems from their ability to undergo fast, reversible transitions between the amorphous and crystalline phases as a function of temperature [1]. The two phases have different optical and electronic properties. These facts have made them the material of choice for rewritable media (CD, DVD, Blu-Ray Disc) and are also exploited in phase-change non-volatile memories. In spite of this, the local structure of the amorphous phase of these materials has been elucidated only very recently [2,3] and the physical mechanisms driving the crystalline-amorphous transitions are not fully understood [4].

We have calculated the Raman spectrum of amorphous GeTe and amorphous and cubic GST by ab initio simulations and an empirical bond polarizability model [5,6]. The computed spectra agree very well with experimental data: in particular, the spectra of amorphous GeTe and GST contain the signatures of all the peculiar structural motifs found in this phase [2,3].

Recently, it was shown that crystalline GeSb2Te4 undergoes insulator-metal transitions driven by disorder as a function of annealing temperature [10]. To shed light on these experiments, we have investigated the electronic properties of very large models of GeSb2Te4 of up to 3500 atoms [11]. We have found that, in the disordered phases, the electronic states responsible for the transport are exponentially localized inside regions having large vacancy concentrations. The transition to the metallic state is driven by the formation of ordered vacancy layers. These results provide a step towards the goal of controlling the degree of disorder in these systems, with the aim of developing novel devices based on multiple resistance states.

We are currently investigating the fast crystallization kinetics in these materials. For this purpose, we employ ab initio molecular dynamics simulations in combination with the metadynamics method [12]. This project is carried out in close collaboration with the experimental group of Prof. Wuttig, also at RWTH Aachen, who is perfoming measurements of the crystal growth velocity of selected phase-change materials over a wide range of temperatures and time scales. 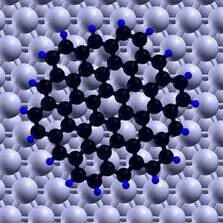 We study the structural, electronic and magnetic properties of graphene nanoribbons and flakes grown on various metallic substrates, including Ir(111) [1,2] and Au(111) [3], in collaboration with the experimental group of Prof. Morgenstern, also based at RWTH, and the group of Prof. Bl ü gel at J ü lich Forschungszentrum.

Recently, the confined electronic states of small graphene quantum dots on Ir(111) have been understood by comparing scanning tunneling spectroscopy images with tight binding calculations based on parameters derived from density functional theory [4].

In a second work [5], we have focused on the edge physics of graphene quantum dots and nanoribbons on the same Ir(111) surface. We have shown that, due to the interplay between a) the strong hybridization between Ir dz 2 orbitals and graphene p orbitals at the edge, b) the significant interaction between the substrate and the interior of the nanoribbon and c) the lattice mismatch yielding a corrugation of the nanostructures at the edge, no magnetic edge state near the Fermi level exists in graphene nanostructures deposited on this surface. The strong interaction between Ir(111) and the graphene nanostructures is related to the presence of a surface state on Ir(111) (having mostly dz 2 character) at the Fermi energy, near the K point of graphene. These conclusions are corroborated by both DFT calculations and STS experiments.

We have also investigated the properties of graphene nanoribbons on Cu(111), Ag(111) and Au(111) [6]. We have found that both H-free and H-passivated nanoribbons possess edge states when deposited on these three surfaces. In spite of this, they do not exhibit edge magnetization, with the exception of H-terminated nanoribbons on Au(111) . These results are explained by the different hybridization between the graphene 2p orbitals and those of the substrates and, for some models, the significant charge transfer between the surface and the nanoribbon.

Self-Assembled Monolayers of Thiols on Au(111) 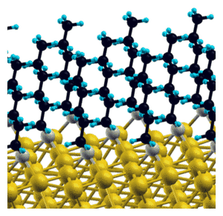 Self-assembled monolayers (SAMs) of thiolates on gold surfaces have received enormous attention in the past twenty years due to the their potential applications in surface coatings, nanolithography, molecular electronic devices and biosensors [1]. However, there is still much debate in the literature regarding the nature of the thiolate/metal interaction, as well as the nature of the adsorption sites of the thiols.

We believe we have resolved the controversy surrounding the (sqrt3xsqrt3)R30 structure of SAMs of methylthiolates (CH3S) on Au(111) surface [2] and the c(4x2) superstructure of SAMs of long-chain thiols on the same surface [3,4] by first principles molecular dynamics simulations and diffraction experiments. We have found that both structures are characterized by a dynamic equilibrium between adsorption on bridge sites and a novel structure where alkyl radicals are bound to an Au adatom. As a result, the interface is characterized by a large atomic roughness with both vacancies and adatoms. However, in the case of long-chain alkanethiols, there is a competition between the ordering of the SAM, which is driven by the lateral van der Waals interaction between the chains, and the disordering of the Au atoms at the interface, driven by Au-S interactions. The constraint of the ordered SAM yields the c(4x2) superstructure of the (sqrt3xsqrt3)R30-structure [3].

These results have been confirmed by extensive grazing incidence X-ray diffraction measurements performed at Elettra (Trieste) and, in the case of methylthiols, also by energy and angle resolved photoelectron diffraction experiments made at Elettra. 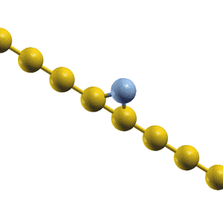 The problem of electron transport in atomic scale conductors has attracted considerable interest in the past few years, both experimentally [1] and theoretically. Ballistic conductance measurements in tip-based devices and break junctions are nowadays experimentally feasible and allow the study of one-dimensional contacts, consisting of just a few atoms.

Recently this problem has been addressed theoretically by the condensed matter group at SISSA in Ref. 2. In this paper the authors used the complex wavefunction band method proposed by Choi and Ihm [3] and extended to ultrasoft pseudo-potentials by themselves [4] to explore the effects of the tips and magnetism on the ballistic conductance in very short Ni nanowires.

We have studied the effect of a Ni magnetic impurity on the electronic and transport properties of a monoatomic Au wire by the above method [5] and a combined DFT and numerical renormalization group approach [6]. The second approach has allowed us to investigate Kondo-like many body effects in these systems, which cannot be grasped by mean-field methods like DFT alone. 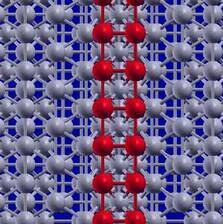 We have studied the magnetic properties of metastable Fe double chains deposited on the reconstructed (5x1) Ir(100) surface [1] using ab-initio density functional theory within the framework of the GGA approximation, using PBE functionals and both scalar-relativistic and fully-relativistic ultrasoft RRKJ pseudo-potentials [2]. We have addressed the energetics of collinear ferromagnetic and antiferromagnetic configurations of Fe wires adsorbed on several experimentally relevant sites of the reconstructed, quasi-hexagonal Ir(100) [3]. Since STM images do not yield information on the position of Ir atoms beneath the Fe chains, we have also studied a structure wherein the surface partially de-reconstructs and the Ir atoms chemically bonded to the Fe chains form a square lattice. Furthermore, we have investigated the effect of spin-orbit interactions on low-energy magnetic configurations. We have found that the magnetic anisotropy energy due to spin-orbit dominates when the double chain is adsorbed on the partially deconstructed Ir(100), so that in this case the ground-state configuration of the Fe double chain should be collinear antiferromagnetic. On the contrary, when the same Fe double chain is adsorbed onto the (5x1) fully reconstructed Ir(100) surface, Dzyaloshinskii-Moriya interactions (which are due to the concerted effect of spin-orbit coupling and a lack of structural inversion symmetry at the surface) should prevail, thus yielding a helical spin structure [2]. 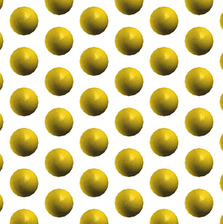 Gold surfaces, both clean and coated, and their surface electronic states are important in many contexts. We have revisited the surface states of the clean Au(111) surface. These states have been studied for a long time [1]. The splitting due to spin-orbit interaction of the L-gap shallow surface state near the Fermi energy has been understood [2]. However, a complete picture of the electronic states of this surface in the presence of spin-orbit has not been provided yet.

In our work [3] we have compared the electronic structure of the unreconstructed Au(111) surface calculated within density functional theory by means of plane waves and fully-relativistic ultrasoft pseudo-potentials on one hand, and scalar relativistic ultrasoft pseudo-potentials on the other hand, where spin-orbit is not included. We have studied the character and spin polarization caused by the spin-orbit interaction of all the experimentally relevant surface states. We have shown that, besides the well known splitting of the L-gap state, the spin-orbit interaction generates, modifies, and splits many other deep surface states in the range 1-10 eV below the Fermi energy. The existence and spin-orbit splitting of these deeper states should be experimentally detectable by angle-resolved photoelectron spectroscopy. 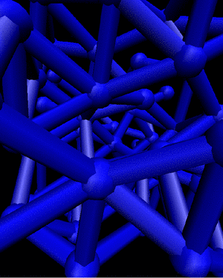 We have investigated monovacancy, divacancy and self interstitials in hcp titanium [1-3], as well as substitutional and interstitial Kr impurities in hcp titanium [2-4], by means of ab-initio DFT methods. We show that single-vacancy and divacancy configurations are equally stable. The calculated monovacancy formation energy is in good agreement with previous theoretical calculations, and agrees fairly well with experimental results. Atomic relaxation around a single vacancy is quite small. As regards self interstitials, we predict that the octahedral configuration is the most stable, followed by the basal octahedral interstitial. However, energy differences between these two configurations are small, suggesting their possible co-existence. The crowdion is the least stable structure, while the tetrahedral configuration is unstable and decays to a split dumbbell configuration. We have also studied possible migration paths for the self interstitials using the Nudged Elastic Band (NEB) method [1]. As far as Kr impurities are concerned, we have found that both the substitutional and the interstitial configurations of Kr are stable. The energetics of small Kr-vacancy clusters for clusters with up to four vacancies and four Kr atoms has also been addressed: the stability of these clusters has been found to be dependent on the Kr-vacancy ratio [2,4]. Finally, we have studied the migration of Kr substitutional [2], Kr interstitials [4], and mono- and divacancies [2] by the NEB method.